Smithsonian Museum of the American Indian

Standing nearly 20 feet high in the prestigious National Museum of the American Indian in Washington, D.C., the “Allies in War, Partners in Peace” statue commemorates the bond between two nations – the Oneida and the United States.

Full of Oneida allegory, the 2,200-pound bronze sculpture depicts Oneida Chief Shenendoah and Oneida woman Polly Cooper, along with Gen. George Washington. The statute symbolizes the friendship that was forged between the two nations during the Revolutionary War. 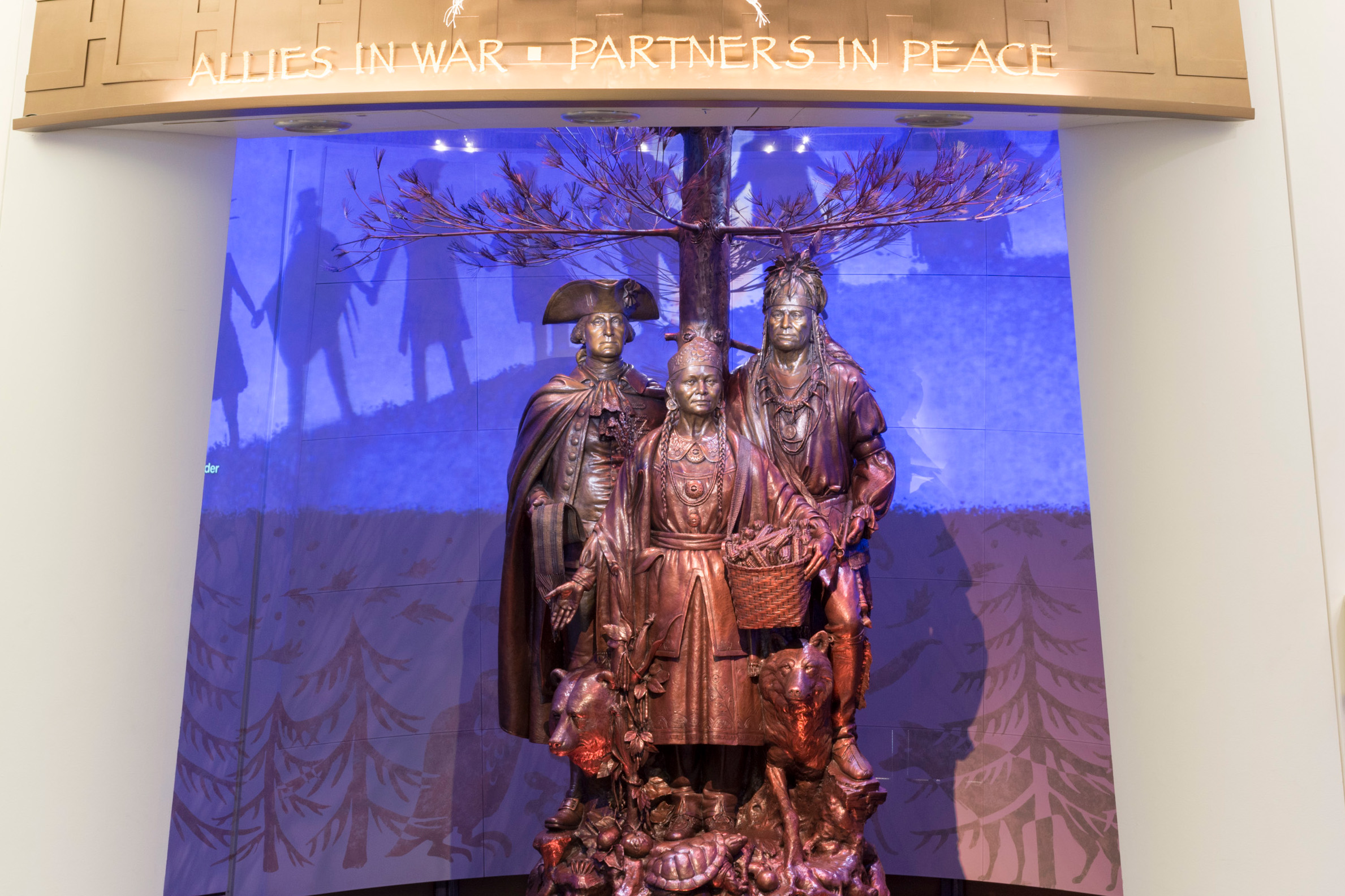 With the Oneida Indian Nation’s continued support, the National Museum of the American Indian recently installed a new, interpretive surround experience to the extraordinary bronze sculpture. The new surround experience enhances the storytelling of the historic alliance with light, sound and projected imagery in an imaginative display that will provide greater context for the two nations’ relationship for museum visitors. Watch the film by clicking the button below.

Visitors will learn the incredible story of Polly Cooper, who was one of a group of Oneida that walked hundreds of miles from their Central New York home to Valley Forge to bring vital supplies and life-saving white corn to the soldiers of Washington’s Continental Army. Cooper remained at Valley Forge to aid the troops and would not accept payment for her services. Chief Shenendoah, as the keeper of the wampum and inaugurator of government-to-government agreements, played a pivotal role in the decision to side with the colonists and is held in great esteem by the Nation to this day.

The statue can be found on the fourth floor of the Smithsonian Institution’s museum, the first in the country dedicated exclusively to American Indians.

In 2002, the Oneida Indian Nation pledged $10 million over a multi-year time frame to the Museum. This investment is in keeping with Oneida traditions of working to preserve and honor their heritage as America’s First Allies. The Nation originally donated the statue to commemorate the opening of the museum in 2004.

Museum of the American Revolution

The extraordinary role the Oneida Indian Nation played in the Revolutionary War is featured in the Museum of the American Revolution in Philadelphia, PA.

During America’s war for independence, the Oneidas fought alongside the colonists in several key battles, including Oriskany, Saratoga, and Barren Hill, and endured vast hardships, including the loss of life. Visitors to the Museum of the American Revolution can take in the rich historical account of the Oneida Indian Nation becoming America’s First Ally. 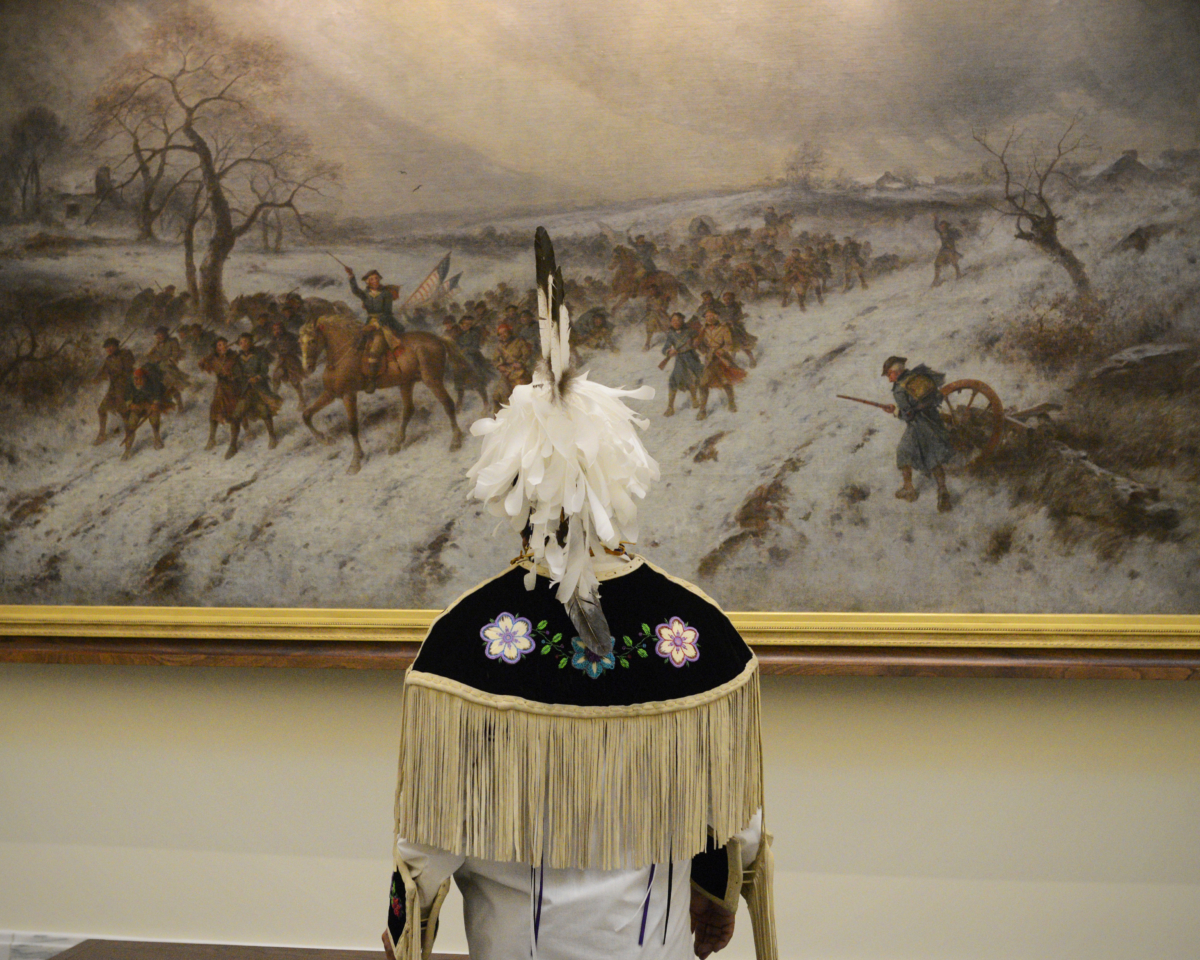 The entire second-floor atrium at the Museum is named for the Oneida Indian Nation, and a prominent gallery, complete with recreated settings, pays homage to the rich historical account of the Oneida Indian Nation’s heritage. This will help preserve the Nation’s culture, share its historic bonds with the founding fathers, and ensure that generations to come can learn about the Nation’s important contributions to establishing the foundation of the United States.

The Museum celebrated its grand opening on April 19, 2017. Opening ceremony speakers included President Joe Biden (then Vice President), journalist Cokie Roberts, Pulitzer Prize-winning author David McCullough, and Oneida Indian Nation Representative Ray Halbritter, who is a founding board member of the Museum. Several dozen Oneida Indian Nation Members traveled to Philadelphia to commemorate the opening of the new museum and were among the first to explore the gallery dedicated to their ancestors.