On a day historically celebrated as Columbus Day, the Oneida Indian Nation partnered with the Museum of the American Revolution to provide another account of the founding of America — the one that highlights Native Americans’ important role in this country, since the beginning.

The Museum honored Indigenous history and culture during a three-day event culminating on Monday Oct. 9 with the premiere of the Oneida Nation documentary “The People of the Standing Stone.”

The film, underscoring the Nation’s role as America’s first allies, was introduced by Oneida Nation Representative Ray Halbritter, who joined Director of the National Museum of the American Indian Kevin Gover and other speakers during a subsequent panel to discuss the film and the importance of promoting awareness of America’s true and multicultural roots.

“The Oneida Nation is pleased to partner with the Museum of the American Revolution to present our people’s role in the founding of America, especially on a day that so often omits Indigenous people altogether,” Halbritter said.

For Heath, performing on Columbus day was extremely important. “It’s Indigenous Peoples Day. It’s not Columbus Day to me. It’s been put in our brains to recognize this person that killed our people. I’m not going to celebrate that,” he said.

The Museum presented a variety of Native American cultural programs including presentations and the hourly dances.

“The crowd at the first dance was pretty big and then it just got bigger, the fourth one was pretty packed,” said Heath, who coordinated the dancers’ involvement in the event. 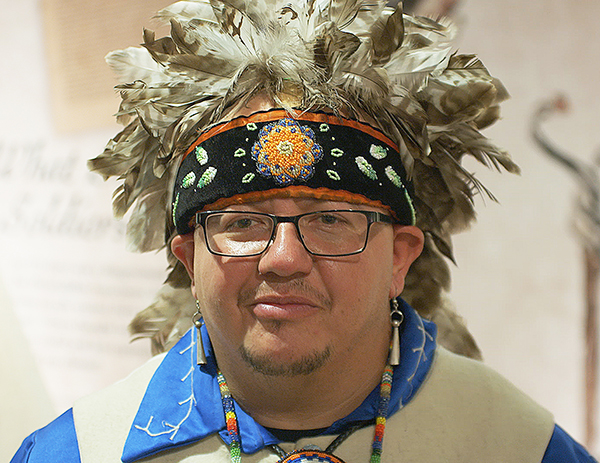 Crowds were standing room only when the troop, dressed in traditional regalia, danced the Fish and Moccasin dances, among other social dances. Each performance was attended by more than 200 people. Many joined in dancing.  And a lot of questions were asked.

“They wanted to know where we are from,” Heath said. “A lot of people don’t even realize that we exist anymore. It’s our job to help educate people. Our dances are important, they have been passed on from our Nation and traded among other Nations. These dances bring our people together to be sociable and get to know each other. Not just Oneida, but Onondaga, Seneca, the Cayuga, all the Six Nations. We come together and get to know each other.”

A similar philosophy is held by the Museum, committed to bringing people together to realize the untold accounts of the founding of America. The complete story of the American Revolution is detailed at the Museum, including an exhibit dedicated to the Oneida’s role as the country’s first ally.

Visiting the Oneida exhibit  while at the Museum, Heath said it’s a “brutal reminder” of what happened to his ancestors during and after the war. Seeing the Oneidas story recognized and their history memorialized in the gallery, Heath said his determination to share the Oneida culture has strengthened.

“People need to know about us,” he said. “My goal is to have our crew of dancers go on tour to reach even more people. Since being a kid I wanted to do this. Now is the time.”

The city of Berkeley, Calif. celebrated the first Indigenous Peoples Day 25 years ago, as a counter protest to Columbus Day and a day to honor Native American history.

The holiday has since been adopted throughout the country in states such as Minnesota and Vermont and cities such as Seattle and Denver. Locally, Ithaca and Akron celebrate Indigenous Peoples Day. 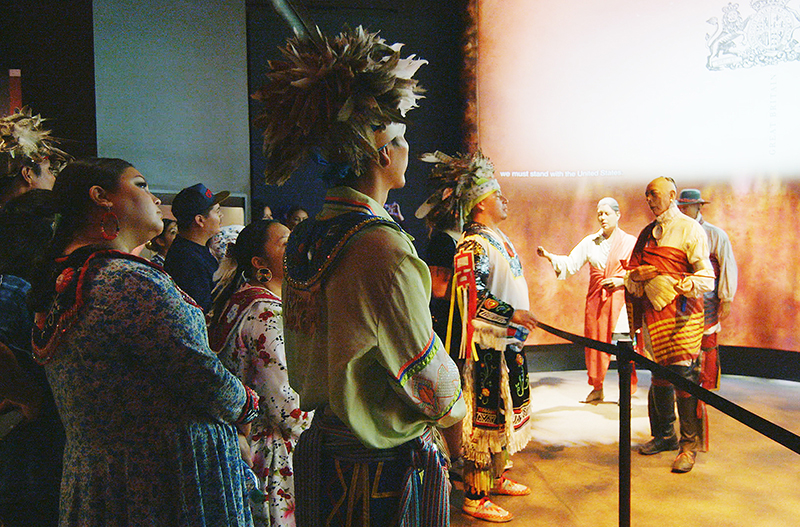 The Oneida Nation is a founding sponsor of the Museum of the American Revolution, which stands as a tribute to the ideals of equality and liberty that America was founded on.

Many Oneida Nation Members traveled to historic Philadelphia earlier this year to participate in the grand opening as well as the recent Indigenous Peoples Day events held at the ground breaking Museum.

Dedicated to taking an unvarnished look at the establishment of this country, the museum provides a setting for the often untold stories of the Revolutionary War.

A prominent gallery, complete with recreated settings, pays homage to the historical account of the Oneidas fighting alongside the colonists during several key battles, including Oriskany and Saratoga, during America’s war for independence.

This exhibit has gained much attention, sparking dialogue and further interest in the Oneida’s contribution to the foundation of America. The Oneida’s historical ties to the founding fathers of America is now preserved for posterity.

“The Oneida people’s story is the kind of American story that has not been told enough — but must be for us to realize the universal ideals of freedom and equality on which this country was founded,” said Oneida Nation Representative Ray Halbritter.

Continued collaborative efforts between the Oneida Nation and the Museum will ensure that generations to come – generations of differing descents will see themselves reflected throughout these exhibits and in these important stories and will be able to stand proud and embrace their heritage. 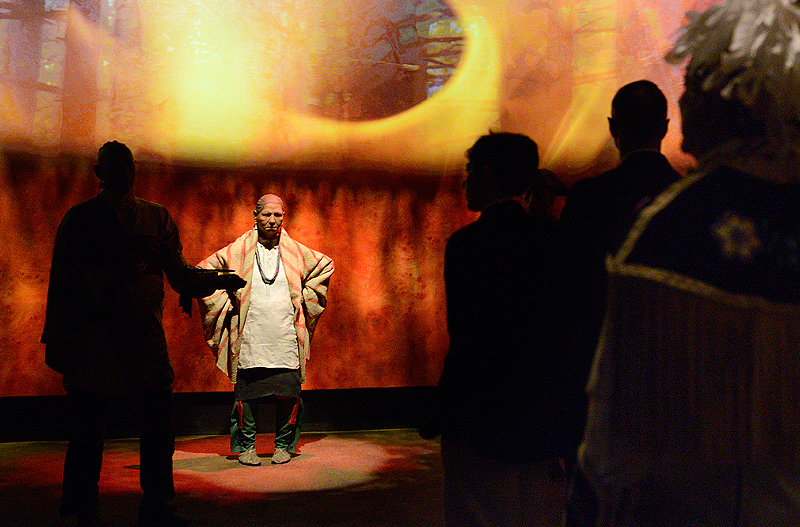 During a war that tore apart families, communities, and Indian nations, the Oneida Indian Nation made a momentous decision to break with the ancient Haudenosaunee Confederacy and join the American cause.

An entire room of the Museum of the American Revolution’s permanent exhibition is devoted to this choice and the Oneida’s role as America’s first ally.

During the war, Oneidas formed friendships with George Washington, the Marquis de La Fayette, and other prominent leaders of the rebellion.

The Oneida Nation Gallery features a display depicting Oneida leaders, including Skenandoah, Wá:li’, Grasshopper, Han Yerry, Two Kettles, and Powless — standing in a field and debating the merits of taking the colonials’ side in the coming war. They recognized the risks were high, and discussed the decision with great seriousness.

Museum guests can stand among the life-size replicas of Oneida heroes and become immersed in the discussion on how they came to this important decision, at a time when most members of the Confederacy sided with the British.

“The Oneida interactive exhibit is one of the highlights for visitors, which is expressed in many reviews,” said Chief Operating Officer of the Museum ZeeAnn Mason. “And the film speaks to all ages, everyone loves it.” 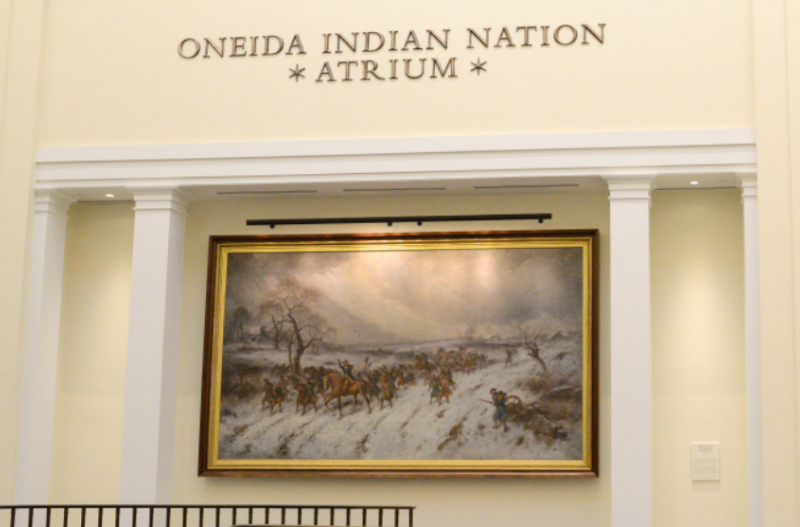 An entire second-floor foyer at the Museum of the American Revolution was named in honor of the Oneida Nation, a founding partner of the Museum. The Oneida Indian Nation Atrium features three impressive paintings depicting major events of the Revolutionary War.

A hand-painted copy of French artist Louis Charles-Auguste Couder’s Siege of Yorktown (1781) depicts Washington and Rochambeau giving orders at Yorktown, Virginia and is displayed at the top of the Museum’s Grand staircase. Rochambeau played a major role in helping the Continental Army win the war.

On the flanking walls are two late-19th-century paintings by Harrington Fitzgerald, a Philadelphia newspaper editor and writer who took up painting. “The Foraging Party,” depicts Washington and his troops at Valley Forge, and the facing canvas portrays “Washington Crossing the Delaware.” 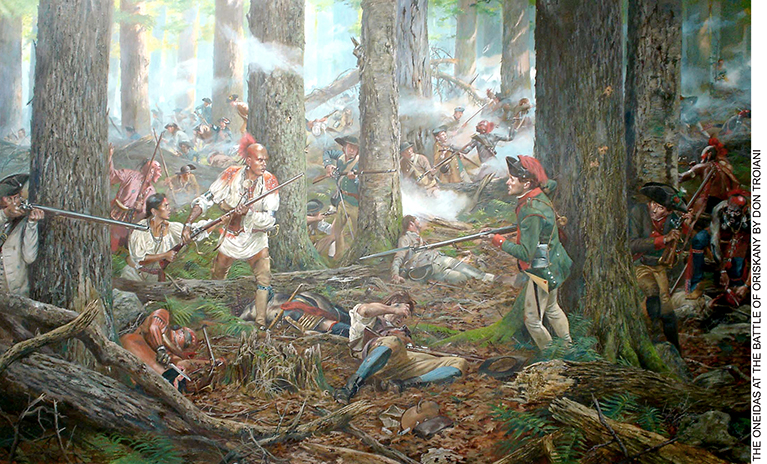 The story of Oneida Polly Cooper delivering corn to feed Gen. George Washington’s starving troops at Valley Forge, while celebrated within the Oneida community, is a little known account from the Revolutionary War.

The film “People of the Standing Stone: The Oneida Nation, the War of Independence and the Making of America” commissioned by the Oneida Nation and narrated by Academy Award-winner Kevin Costner, tells the historical account of Oneidas participating in the war and illuminates how Indigenous people were a pivotal force in the formation of the United States of America.

The film was specifically chosen to premiere at the Museum of the American Revolution on Columbus Day, a holiday that exemplifies how history is often airbrushed to remove nuance — and to omit inconvenient truths.

“On a day like Columbus Day, the story does not have to only be about the conquest of this land — it can and must also be about the contributions that the Indigenous people of this land have made to this great country,” said Oneida Indian Nation Representative Ray Halbritter.

The documentary traces the history of the Oneida Nation, and how it stood in solidarity with General George Washington to help America forge its independence during the Revolutionary War.

The film also explores how — despite that history and despite treaties that were signed between the Nation and the founders — the Oneida people’s land was slowly appropriated by government agencies and land-hungry European settlers.

“The film is part of the museum’s effort to show the consequences of the American Revolution from many perspectives,” said Scott Stephenson, vice president of collections at the Museum.

Screening times of the film vary and visitors can check with the museum box office for daily program information.

Click here to view more of the Oneida Nation exhibit at the Museum of the American Revolution, as well as hear reaction from Nation Members Sheri Beglen (Wolf Clan) and Ron Patterson (Wolf Clan) after they first see Oneida history memorialized for posterity, by watching the NYC-ARTS episode featured recently on PBS.