Life, like any journey, can be full of twists and turns. Not knowing where a path will take you can be both exciting and a little intimidating. For Kathy Kuhl (Wolf Clan), one path led her to pursue her doctorate.

Education is very important to Kathy, who’s already earned her bachelor’s and master’s degrees in history from the University of Central Oklahoma. She noticed early in her academic career that most books largely ignored the history and impact of American Indians during the early years of the United States of America. Her love of history led her to examine her own story, and the broader story of the Oneida people.

In the fall of 2014, Kathy pursued a research-based course of study overseas to work on her dissertation at Swansea University in Wales. She stayed in contact with her professor from Swansea, Steve McVeigh, both in Wales and in Oklahoma when he visited for scheduled symposiums, which kept her on track. As an Oneida, Kathy believed that by adding her voice to the historical and educational conversation, she would be able to reveal a more complete history of the founding of the country – and the legacy of that history that continues to affect American Indians today.

“When you finally finish school, you don’t know what the next chapter will be,” Kathy said. “I wanted to discover why our history was hidden. This dissertation gave me a goal to work toward and kept me focused.” 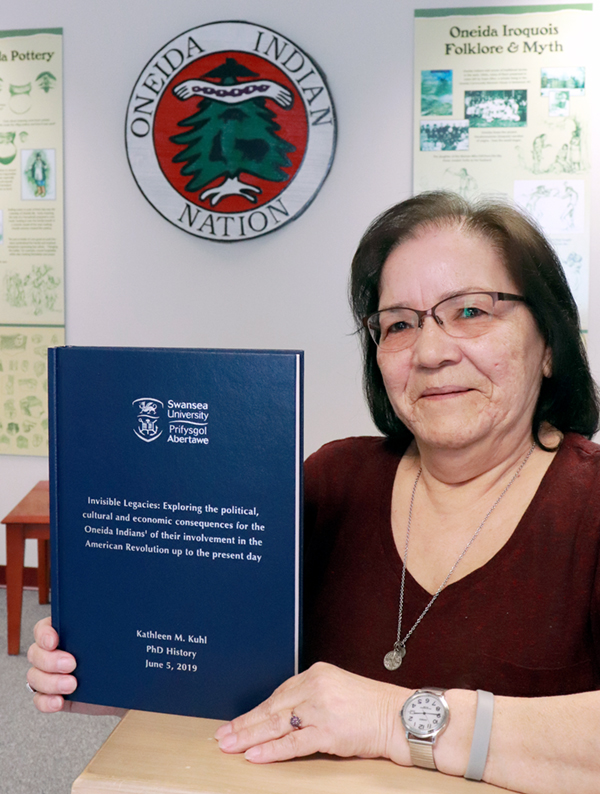 While there are a few books that focus on the Oneidas’ role in the founding of the United States, none get into the aftermath of that fateful decision to side with the American colonists in the Revolutionary War, which Kathy calls the “invisible legacies.” The effects of the colonists’ Euro-centric role of women can be felt by the Oneida people to this day, but the resilience of the traditional culture is apparent throughout history and successfully passed down from generation to generation. The ability to tell that story as a descendant of the Oneidas was important to her personally.

“I immersed myself in the culture and was among the first people to move back to Nation lands in 1994,” she said. “My mother grew up on the Onondaga reservation, but I learned a lot from [Bear Clan Mother] Marilyn John. With the dissertation, I wanted to really learn who our people were and pass it down to the next generation.”

One of the many issues Kathy wanted to highlight was the role of women in Oneida culture.

A significant source for Kathy’s dissertation was Joseph Glatthaar and James Kirby Martin’s book Forgotten Allies: The Oneida Indians and the American Revolution, which examines how and why the Oneidas decided to support the American colonists in the Revolutionary War. Their book focuses on the relationships Oneida leaders, such as Chief Skenandoa, cultivated with several white male missionaries.

One of them, Reverend Samuel Kirkland, is hailed in Glatthar and Martin’s book as a key contributor in getting the Oneidas to side with the colonists. But in her research, Kathy found his influence with Oneida leaders ignored and trivialized the importance of women and their roles within the Oneida community, which was a common occurrence as Europeans continued to immigrate to the Americas.

Kathy notes in her research, “Colonists did not accept the equal role that women held within the confederacy and minimized their importance by writing derogatory, and unfair statements about the women…they were portrayed as drudges, slaves to the men, and did not hold the role of colonial women as homemakers. This can be attributed to minimal recognition according to patrilineal thought and repeated information from early authors in many history books.”

Revealing the invisible legacy of the Haudenosaunee women who were a major component of the confederacy, such as Polly Cooper, Sara Aines and Two Kettles Together, was paramount to Kathy’s research. Kathy found numerous letters, articles and correspondence with the Bureau of Indian Affairs and New York State that disclose the true impact of Oneida women at that time. She explores and critiques the work of early historians that propel the voices of those like Reverend Kirkland, which largely dismiss that impact in the telling of the Indigenous history of the United States.

Haudenosaunee women’s role in daily life, especially during the Revolution, was significant and served many purposes. From internal political negotiations to serving in battle, it was the women who were able to shape the course of action of each of the six nations. Kathy highlights the work of Barbara Graymont, who discusses how Mohawk woman Mary Brant was able “to sway wavering warriors and keep them loyal to the British.” She notes that while Brant was on the other side of the Oneida alliance, she held strong in her belief that she was doing right by her people.

It’s these stories that are left out of many written historical accounts. As Kathy says in her work, “There is no way to authenticate these stories that were passed down from woman to woman except that they are still alive and repeated to Oneida descendants.” For its part, the Oneida Indian Nation has taken the initiative in recovering this historical legacy by locating all of the stories and recording them for future generations.

Ever since Kathy began her higher education, she wanted to study American Indian nations – and not just the Oneidas. She knew many tribal nations had similar issues regarding accurate representation and lost history, but the extent of the effort to abolish that history was astonishing to her. Kathy committed herself to uncovering that hidden history.

American Indian people have long been treated as an afterthought. In addition to the loss of land, many were forced to lose their culture. That is why Kathy wanted to provide her own voice, an Oneida’s voice, to the historical record.

“I want to open some eyes in the younger generation,” she said. “We relied on oral traditions to learn about our past, and we are fortunate it continues to be passed down.”

Graduation day finally arrived for her on June 13, and Dr. Kathy Kuhl now proudly displays her degree in her home. She hopes to get her dissertation published as a book as soon as possible and has already received a hard cover version of her dissertation from the university. Now she’s ready for the public to see it. Her professor, who’s been providing support since she started the program, is helping her find a publisher.

The Oneida Indian Nation’s Scholarship Program enabled Kathy to continue her studies at the highest level. She and two of her children, Heather Miller and Will Kuhl (both Wolf Clan), have used the program to fund their education. Her daughter, Amanda Hjort (Wolf Clan), is continuing to work on her degree as well, while her other daughter, Rhonda Overton (Wolf Clan), has been a constant cheerleader.

Her family also shares a dedication of service to the country. Heather served 12 years in the Air Force and also received her master’s in Oklahoma. Will served 6 years in the Army, including a deployment to Afghanistan, and is thinking of enlisting in the Air Force, while her eldest son, Ron Overton (Wolf Clan), served 3 years in the Marines.

Kathy is thankful to the Nation and for its commitment to supporting its Members’ education.

“It’s a great program,” she said reflecting on her educational journey. “We can take control of our lives and do what we’re passionate about. Without the Nation, I wouldn’t have gotten where I am.”