Part of a collective revitalization effort by the City of Rome to honor the diverse culture and history of the area, the new public artwork commemorates the historic Oneida Carrying Place. Measuring an impressive 7 feet by 27 feet, the display features three bronze panels behind a life-size bronze sculpture of an Oneida Warrior that showcases the significance of the Oneida Carrying Place. The path became a critical strategic area during the American Revolution when the Oneidas helped defend nearby Fort Stanwix from a British siege.

Oneida Indian Nation Homelands (May 25, 2021) –  The Oneida Indian Nation, together with officials from Oneida County and the City of Rome, today unveiled a new bronze sculpture and public artwork that commemorates the historic Oneida Carrying Place, a vital mode of transportation, trade and commerce before and during the Revolutionary War. Measuring an impressive 7 feet by 27 feet, the display features three bronze panels behind a life-size bronze sculpture of an Oneida Warrior.

The Oneida Carrying Place played an integral role in the success of the Americans in the Revolutionary War. While it was used by the Haudenosaunee well before European settlers arrived, the path became a critical strategic area during the American Revolution when the Oneidas helped the American colonists defend nearby Fort Stanwix from a British siege. The attempted siege failed and the Americans, with their Oneida allies, helped change the momentum of the war.

The new bronze sculpture is located at 301 W. Dominick Street in the City of Rome, on a section of the Oneida Carrying Place which leads to Fort Stanwix. This location is to honor the Oneida people for their sacrifices that helped define the history of the United States. 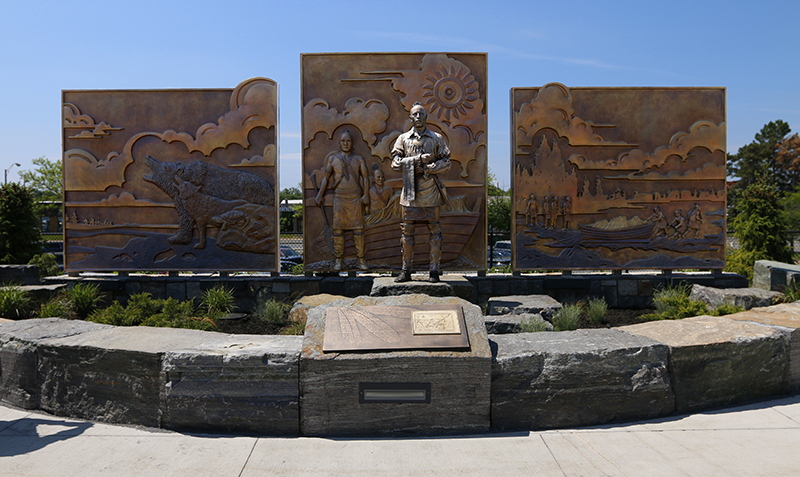 “Recognizing the contributions and sacrifices of our ancestors is among the most important priorities for the Oneida Indian Nation,” said Oneida Indian Nation Representative Ray Halbritter. “As we continue to make strides in creating a truly inclusive community, this beautiful tribute will remind us to never forget our collective past and help visitors learn about the role this region played in the founding of the country.”

Commissioned by the Oneida Indian Nation, the public artwork continues a collective revitalization effort by the City of Rome that strives to showcase the rich, diverse culture of the area with input from the voices that contributed to it.

“We thank the Oneida Indian Nation for their contributions to our country and to our region, including this vitally important commemoration in the City of Rome,” Oneida County Executive Anthony Picente Jr. said. “Designed with copper in honor of The Copper City and beautifully detailing our collective history, we can all celebrate the significance of this sculpture, as it is a tribute to the legacy of partnership between our communities.”

“Congratulations to the City of Rome and Oneida Indian Nation on the Carry Sculpture to honor the legacy of the historic Oneida Carry trade route and the contributions of the Oneida people to our shared history,” said Alberto Bianchetti, National Grid’s Central New York Regional Director. “This common mission of bringing partners together for a better future is the same today as it was 200 years ago during a crucial time of the Revolutionary War. The joint effort to revitalize the city’s historic and Arts District corridors is shared by National Grid. Our Urban Revitalization funding on projects like SMART Walk is setting a great example of Oneida County’s sustainability commitment and helping drive the city’s renaissance and transforming the downtown into a tourist destination. We will continue to work alongside community leaders to invest in projects that transform our communities and raise public awareness of all our region has to offer.”