Home/Latest News/Oneida Indian Nation Statue at the National Museum of the American Indian Enhanced with New, Multimedia Display
Previous Next

With the Oneida Indian Nation’s continued support, the Smithsonian’s National Museum of the American Indian recently installed a new, interpretive surround experience to the extraordinary “Allies in War, Partners in Peace” bronze sculpture exhibit that honors the friendship forged between the Oneida Indian Nation and the United States during the American Revolution. The new surround experience enhances the storytelling of the historic alliance with light, sound and projected imagery in an imaginative display that will provide greater context of the two nations’ relationship for museum visitors.

“This enhanced interpretation provides an immersive experience for visitors to understand this country’s rich history, so that there is a deeper understanding of the nuance, texture and depth of that history — an understanding that goes beyond the two-dimensional stories that too often oversimplify how this great country was founded,” said Ray Halbritter, Oneida Indian Nation Representative and Nation Enterprises CEO at a recent dedication ceremony. “This exhibit commemorates the friendship that was forged between the Oneida Indian Nation and the United States during the Revolutionary War, as well as the incredible sacrifices made by our ancestors during the founding of our country.”

In 2002, the Oneida Indian Nation pledged $10 million over a multi-year time frame to the Museum, and this latest investment is in keeping with Oneida traditions.

“We are pleased to continue our partnership with the Smithsonian’s National Museum of the American Indian. This museum not only gives the Oneida Indian Nation, but all American Indian nations, the opportunity to share their story accurately and completely,” said Halbritter.

The Nation originally donated the statue to commemorate the opening of the museum in 2004. Created by Edward Hlavka from St. George, Utah, “Allies in in War, Partners in Peace” stands nearly 20 feet tall and weighs 1,925 pounds. The statue, which depicts Oneida Chief Skenandoah and an Oneida woman, Polly Cooper, standing alongside Gen. George Washington in honor of the interminable bond between the two nations, now features a new eight minute narration and short film that fills the entire gallery from floor to ceiling. The gallery can be found on the fourth floor of the museum, named in honor of the Oneida Indian Nation. 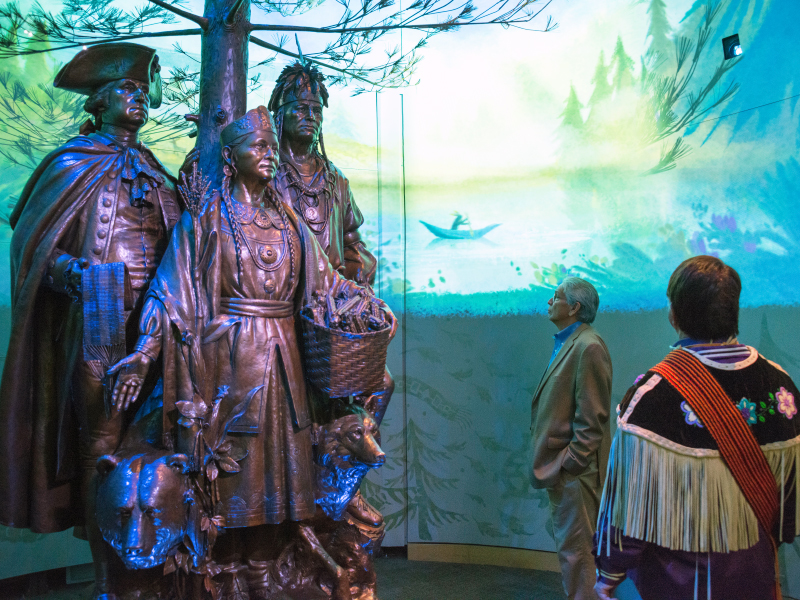 The enhanced exhibit features a video surround, immersing visitors in the history of the Oneida Indian Nation. Photo courtesy of NMAI.

“With the Oneida’s gift, the Smithsonian’s National Museum of the American Indian is able to animate this story in a compelling way for our visitors,” said Kevin Gover, Director of the Museum. “We are ever grateful for their generosity.”

Oneida Indian Nation Bear Clan Council Member Brian Patterson attended the dedication and hopes those that experience the exhibit will leave with a deeper understanding of the Nation, past and present.

“I am drawn to the exhibit with fond memories of Bear Clan Mother Marilyn John, who would sit there for hours watching and listening to visitors’ reactions to the monument,” Brian said. “She would then talk to them and share the story of the Oneida Indian Nation and our role in the Revolutionary War, bringing our history to life.”

Now, with the new immersive experience added to the statue, that era is brought to life once again.  “The voices, songs and imagery make it an unforgettable experience,” he said. “It will always hold a special place in my heart.”

Visitors will learn the incredible story of Polly Cooper, who was one of a group of Oneida that walked hundreds of miles from their central New York home to Valley Forge to bring vital supplies and life-saving white corn to the soldiers of Washington’s Continental Army. Cooper remained at Valley Forge to aid the troops and would not accept payment for her services. Chief Skenandoah, as the keeper of the wampum and inaugurator of government-to-government agreements, played a pivotal role in the decision to side with the colonists and is held in great esteem by the Nation to this day. 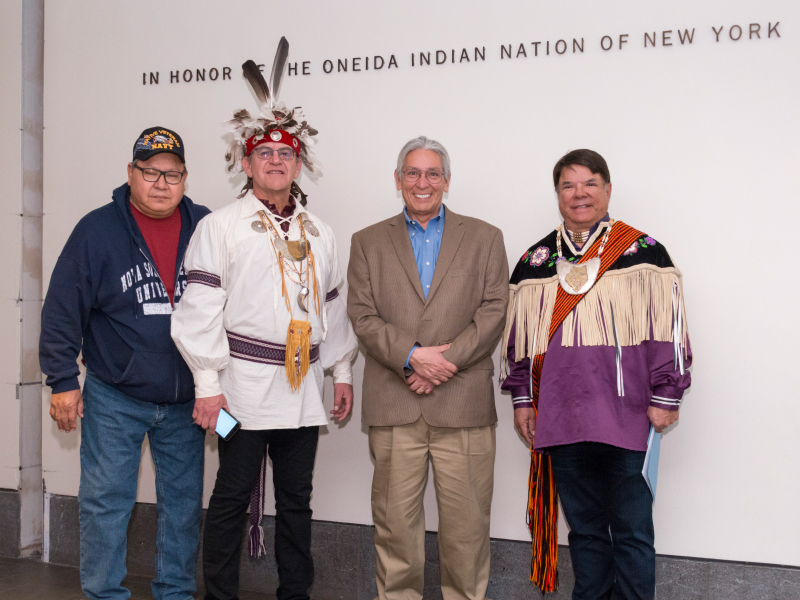 Wilson Stevens (Bear Clan) also attended the dedication in Washington, D.C. with his wife and granddaughter.

“It’s amazing,” Wilson said looking back on the ceremony. “It was my third time seeing the statue and the new presentation is very well done. It’s much more interactive, which is great because a lot of people walk in and look, but can’t relate to its significance.”

More than 125 specialty lights illuminate the myriad symbols incorporated in the statue. Six digital projectors cover the curved walls of the fourth-floor alcove with images of the indigenous landscape filled with flora and fauna, battle scenes of the Oneida and Americans fighting the British side-by-side, and visions of hope for the future. Incorporated in the space is an assistive listening system for the visually impaired.

“We have heartfelt gratitude for Museum Director Kevin Gover and the entire staff for helping to bring our honorable story to life,” Brian said in recognition of the Smithsonian and its staff. “We are extremely proud of the ‘Allies in War, Partners in Peace’ exhibit at the museum and encourage anyone who visits the museum to see it.”

CLICK HERE to view the video presentation that is part of the new exhibit enhancements to ‘Allies in War, Partners in Peace.’