Did You Know? Curiouser and Curiouser

Did You Know? Curiouser and Curiouser

Back in the day (the day being circa 1910), a group of City of Oneida businessmen had the idea to found a boosters club, a form of civic organization recently come into vogue, touting cities’ attractions.

“Oneida [NY] was right in line and organized the Sachems of Na-Gar-Ah. The membership was drawn from all walks of life. The group wore a long gown of orange and black and the officers were [wore] full Indian regalia, including headdress of feathers.”

This undated quote from the Oneida Democratic Union said the group marched in various parades and conducted street carnivals as a means to advertise the City of Oneida.

According to the Official Souvenir Program, Na-Gar-Ah Carnival dated Aug. 8 to 13, 1910, Oneida, N.Y.,  the name was chosen upon a vote of the membership and the organization was  “… founded on Indian principles, and its affairs conducted along the lines of old Indian councils. The Oneida Indians were the pattern, and with the opening of the membership list a number of the Oneida Indians sought admission, and were received, among them being Chiefs A. D. Burning and Joseph Johnson. Mr. Johnson assisted materially in shaping the affairs of the organization, as they pertained to the ritual Indian work, etc. …”

The club then divided its members into three sub-divisions (care to guess?): wolf, bear and turtle, complete with chiefs and sub-chiefs.

And their headquarters were located in a … wait for it … wigwam. Their chosen name for the club they translated as The People of the Stone*.

It appears that Oneidas held the group, at least the president, William Parkell, in good stead, as they adopted him and his wife in an elaborate ceremony spoken in Oneida and translated to the crowd of around 3,000 by Chief Johnson. According the group’s booklet from its carnival in 1910:

“The ceremony of naming was delegated to Lydia Doxtader and she announced that the council of women had christened Mr. Parkell “Skan-a-wa-dee.” Mrs. Parkell was christened “Ga-ne-schunt” by Mrs. George Stabb [Lillian Burning], following the decision of the council of women. Mr. Parkell’s name means “beyond the swamp,” and Mrs. Parkell’s, “shaking things down.” Chief Harry Isaacs of the Onondagas chanted the adoption song. … The group was photographed and the ceremonies concluded with the eating of corn soup which been prepared over the camp fire by the women.” 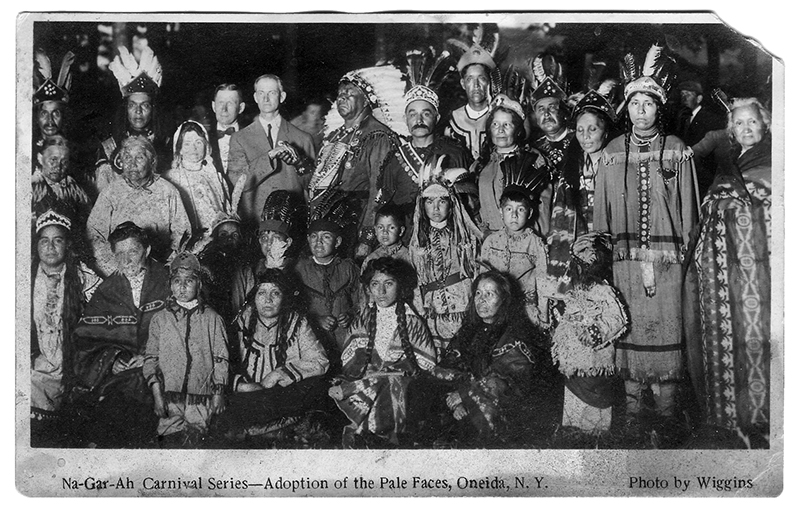 This photo was featured in the Na-Gar-Ah Carnival booklet from August 1910. It commemorates the adoption by the Oneidas of the club’s president, William Parker.

(top photo) The carnival booklet was acquired by the Shako:wi Cultural Center. The pins and medals are part of the club’s memorabilia and belong to Becky Karst, daughter of Marty Johns (Turtle Clan).

If a photo speaks a thousand words, what words exactly could describe this photo? What is this: flattery, mockery, or something in between? It’s doubtful an answer can be discerned.

But perhaps some insights can be gleaned from Chief Joseph Johnson, who wrote the introduction to the club’s carnival booklet. His words resonate to this day:

“The white man’s history of the Six Nations, which is better known as the Iroquois Confederacy, is very brief. According to Indian legend and tradition, very little of so-called Indian history is at all accurate. The writers were not well enough acquainted with the various tribes to obtain the real facts, so that the greater part of these histories are merely suppositions.”

This article originally appeared in the September/October 2010 edition of The Oneida newsletter.