“It was always the Air Force for me,” Naomie Pawlikowski said unequivocally during a Veterans Day phone interview. She was getting ready to return home for the Thanksgiving break – the first time she’ll be back home since she first arrived at the academy in June.

The daughter of Robert Pawlikowski (Turtle Clan) and Jennifer Evans, Naomie is almost done with her first semester at the Air Force Academy in Colorado Springs. She graduated from Oneida High School this past June after a grueling application process that just concluded in March. Robert believes attending the academy is a great opportunity for her to chase her dreams.

“It means the world to me and I’m so proud of what she’s been able to accomplish already,” Robert said. “She’s had her heart set on this for years and she’s worked so hard to make it happen.” 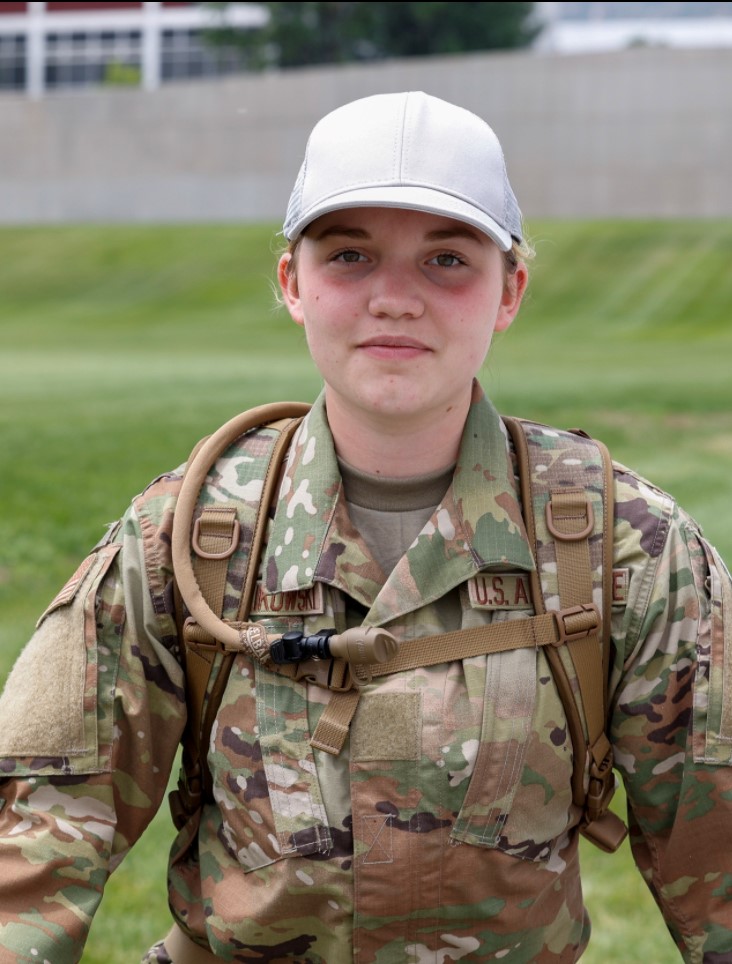 Naomie in uniform at the Air Force Academy

Acceptance to the academy was the culmination of a lot of hard work, which included fitness tests, interviews, tons of paperwork and a Congressional nomination. Out of 10,000+ applications, Naomie was among the 1,100 selected.

“You have to reach out to your Congressman personally,” she said. “Then I had to interview with this whole panel of people, and later on, Congressman Brindisi called me himself in November last year to tell me that I received one of the nominations. It was really exciting!”

It was all worth it for Naomie. As a member of the exclusive group that is awarded acceptance to one of the United States’ military academies, she is well aware of the opportunities that await once she graduates. When that day comes, Naomie says she ultimately wants to be a physician assistant. But for now, she’s still deciding whether to study biology, or study history and then pursue a graduate degree later on.

When Naomie was younger, she remembers visiting her uncle (her mother’s brother) at various Air Force bases across the country. She quickly became enamored.

“Visiting my uncle was a huge inspiration,” Naomie said. “It was always cool to see the bases and get pictures taken with him, especially as a kid.”

“He is actually active duty in the Air Force right now,” she added. “And my great-grandfathers on both sides of my family were in the military.”

Naomie’s great-grandfather, Robert Paradowski, the husband of Betty Phillips (Turtle Clan) and her dad’s grandfather, served in the military as well. That legacy of service is something that dates back to the founding of the country for the Oneida Indian Nation. Oneida Members have served in every armed conflict since the Revolutionary War. While not a Nation Member herself, Naomie’s family embraces that heritage.

“I know there are a lot of Native Americans that come here, too,” she said. “We have a Heritage Club and they hold events all the time. It’s definitely something I want to be a part of.”

As for life at the Air Force Academy, Naomie says it’s similar to normal college life, except for the required training days. On these days, cadets have to do “morning stand-ups” – a procedure where they have to be under pressure and answer questions from officers. It’s a proven military method that improves individual and team performance throughout the rest of the day.

The training for cadets at the academy is the preparation for them to become future officers. Leadership is a key characteristic that they are looking to build in students.

“Eventually, I’ll be stationed somewhere and have to look over people,” she said. “So, they’re just training us to be leaders and know how to work with people.”

Leadership is something Naomie already has in spades. Her passion to explore her interests has led many organizations to acknowledge her successes. Prior to entering the academy, she excelled in a class at Madison-Oneida BOCES’ Allied Health Partnership program and earned the President’s Award of Excellence for “demonstrating academic excellence, leadership, and a desire to further her education while committing to be of service to others.”

“I just really enjoyed the class,” Naomie said. “And if you are passionate about something, you really want to do well and enjoy learning about it. I like going the extra mile and I think that’s where that came from.”

Naomie also has a musical talent and played flute throughout high school at Oneida. She even took on the bass guitar to play in the jazz band and won a Jazz Award. She’s looking forward to continue playing the flute in the orchestra at the academy, but has been so busy with school work and rehabbing from a torn ACL she suffered during basic training to take on the added responsibility.

Among the many military activities she’s looking forward to is learning to fly. There are a few options that cadets can choose aside from piloting an aircraft. Naomie said freshmen don’t get to fly much until the spring or next summer.

“We have the option to do these gliders where they tow a glider up and then you glide down and land it,” she said excitedly. “Then there’s another thing called ‘jump’ where you learn how to parachute out of an airplane. The training is intense, but you can get around ten jumps in the summer!”

To say Naomie is looking forward to it is probably an understatement. Her dad is just hopeful that she experiences everything she can.

“We’ve always told her to do what she’s passionate about,” Robert said. “The rest will fall in place.”

With all of these new experiences in line over the next few years, she’s ready to explore even more. Her eyes are on the prize and she is ready to serve as well.

“Service is what it is all about,” she said in closing. “I’m grateful for the opportunity and ready to go wherever I’m asked to go.”