From ancient times to the present, onikó:lha’ (o  knee  goal), or Wampum – a sacred substance that many believe has a healing presence – attests to the truth, importance and significance of a message. It is the national and common property of the Oneida Indian Nation.

To the Oneida Indian Nation’s forefathers, wampum was a symbolic material linked to the Peacemaker’s founding of the Haudenosaunee Confederacy. When beads were collected into strands or woven together as belts, the wampum stood for the authority of a spoken message.

To the Oneidas today, wampum contains the wisdom of their ancestors, from the Peacemaker to the present. It represents the Oneidas and memorializes their rich history. Wampum represents an agreement to hold onto traditions because history and laws are wrapped up in it.

Any statement not accompanied by wampum was likely to be false or trivial. A very important message, such as a treaty, required a large amount of wampum often in the form of a belt. The words of the message were so closely associated with wampum that, after being “read into” the shell fabric, the words could be recalled by viewing the wampum object. Wampum also, therefore, was a memory aid.

Indigenous people in the Northeast used wampum for millennia to mark important occasions, begin and maintain alliances, conduct trade and demonstrate rank. Some beads have been dated to as long as 4,500 years ago.

White beads, usually tubular in shape, were made from various species of whelk, and purple beads, usually rectangular, were made from the growth rings in quahog shells. The beads were carefully cut from the shells and ground smooth against stone; a stone drill was used to create a hole in the center of the bead so it could be strung on a combination of thongs made from the sinew of deer and other animals and thin strings made from plant fibers (perhaps milkweed or hemp).

The use of wampum among the Haudenosaunee illustrates the well established trade routes among various Indian nations that ranged from the Atlantic coast to the northern plains. Wampum was exchanged as far west as the Dakotas long before European contact.

While reproduction glass and clay beads are widely used today, authentic wampum, although scarce, is still used in the creation of replicas of historic belts and designs.

A 17th-century missionary compared wampum to silver and gold, noting that it “answers all occasions.” Wampum was used as ornamentation for clothing and the body, as tribute from the vanquished to the conqueror, as ransom for captives, as prizes in games, as compensation for crimes, and even as an integral part of a marriage proposal. A young man would choose one or two older proxies to deliver his proposal and a gift of wampum to the prospective bride’s family. If the family kept the wampum, the proposal was accepted. If the wampum was returned, the young man was free to look elsewhere for a mate.

The Indian nations who used wampum did not consider it currency in the same way Europeans viewed money. However, because it was so often given as a gift between friends and as ransom, non-native traders considered wampum “Indian money” and even went so far as to assign conversion values to the beads. In 1637, wampum beads were valued at six a penny in Massachusetts and were considered legal tender for small transactions, while Connecticut accepted wampum beads in payment of taxes at the rate of four a penny. Whelk beads, or white beads, were less valuable than quahog or purple beads; by 1640, Massachusetts had declared that purple beads were worth twice as much as white beads. As late as 1693, passengers on the New York and Brooklyn ferry could pay their fares with either silver or wampum. The last recorded exchange of wampum as money was in New York in 1701.

Designs in the strings, gauntlets, necklaces and belts of wampum served as a device for remembering events and legends. The beads’ colors also held their own messages: White beads signify energy and brightness, while the purple beads denote solemnity or sorrow.

The Hiawatha belt may be the oldest wampum belt in existence, and the seriousness of its subject matter – the formation of the Confederacy of the Five Nations – is shown by the purple background, while the energy of the Tree of Peace and each of the member nations is shown in the white design. The Hiawatha Belt forms the basis of the flag of the Haudenosaunee Confederacy. 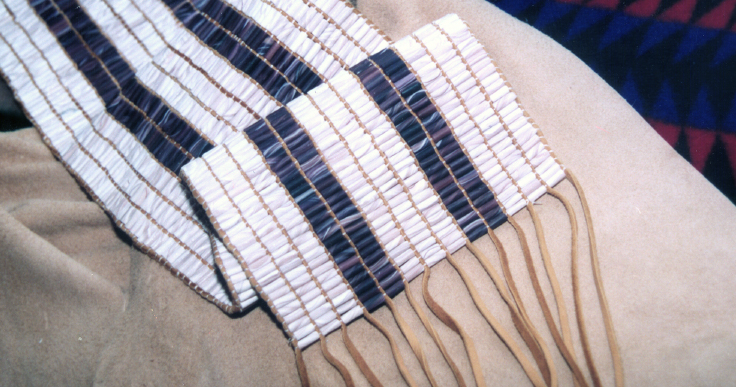 The Two-Row wampum codified an alliance between the Haudenosaunee and the Dutch in the early 1600s. The white shells symbolize the purity of the agreement and represent a river. Three beads of white wampum separate the purple rows, and those three beads represent peace, friendship and respect. The two rows of purple, which “have the spirit of your ancestors and mine,” symbolize two vessels traveling the river together, one for the Indian people and one for the non-native people. “We shall each travel the river together, side by side, but in our own boat. Neither of us will try to steer the other’s vessel.”

Also known as the Covenant Chain belt, this wampum belt is often identified with the 1794 Treaty of Canandaigua, although historians believe it probably was given to the Six Nations at a treaty signing in 1789. The belt features a longhouse flanked by two smaller human figures, with 13 larger human figures stretching out to each side to represent the original 13 colonies. Each human figure is connected to the next via a wampum chain, representing an unbreakable alliance. 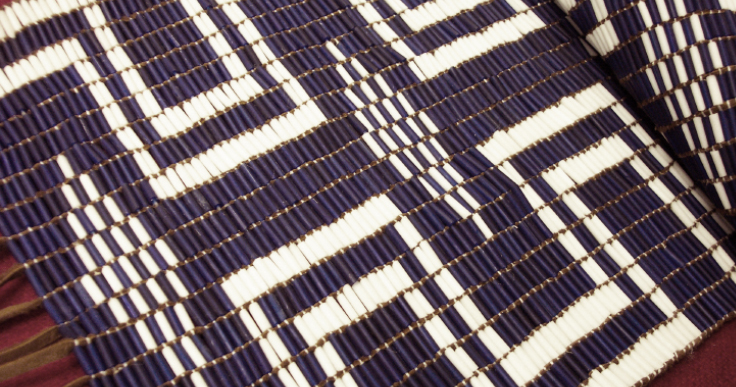 The rectangle shapes of the Oneida Belt depict the Six Nations of the Haudenosauee Confederacy and the diamond shapes depict the council fires of each Nation.