The book, “Washington’s Secret War: The Hidden History of Valley Forge” written by Thomas Fleming, touches upon a part of Revolutionary War history often neglected in other tomes. The book describes Oneida participation at Barren Hill in Pennsylvania in 1778 when Oneida sentries engaged the enemy, who were in the process of surrounding a large portion of George Washington’s army.

According to the author, the Oneida, who had been allied with the French during the French and Indian War, readily agreed to fight with the Marquis de Lafayette on the side of the colonists in the Revolutionary War. In one passage, Fleming describes how the Oneidas came to join Washington’s forces at Valley Forge:

“After several days of parleying and distributing presents, the Oneidas and their allies agreed to take up the hatchet for the Americans and promised to send about fifty of their best warriors to Valley Forge to serve under General Washington. The commander in chief greeted them with great ceremony. They were escorted to the artillery park, where thirteen cannon were discharged to welcome them. Washington invited their chief warrior to dinner at headquarters, along with the French interpreter who had accompanied them from northern New York…”

The book continues to chronicle the Oneidas involvement at Barren Hill, where the Marquis set up camp about 12 miles outside of Philadelphia, contrary to Washington’s orders. Due to a traitor in the Marquis’ ranks, the British were informed of the encampment and proceeded to divide their forces and march on the Americans.

Although the Oneidas fought bravely, Fleming writes: “Unfortunately, neither Lafayette nor many other white eyewitnesses gave the Oneidas the credit they deserved for the skirmish in the woods on the Ridge Road which held up (British Commander in Chief Sir William) Howe’s main column and for their role in the rear guard’s fighting retreat. Many commentators tried to make a joke out of the encounter with the British cavalry, claiming that the Oneidas and the dragoons were equally frightened and both ran away. This prejudiced account is contradicted by other witnesses, who reported that after the British retreat began, the Oneidas and (American General Daniel) Morgan’s men recrossed the Schuylkill and skirmished on the royal army’s flanks as they trudged back to Philadelphia.

“It’s refreshing to read an accurate depiction of our people’s contributions to the United States’ War of Independence. As an informal student of history, I have read many works that fail to even mention our allegiance to this country in its first hours of need. To the author, Thomas Fleming, I say bravo and thank you.”

The 400-page missive, published by Smithsonian Books in October 2005, is available in hardcover from www.barnsandnoble.com  and www.amazon.com. 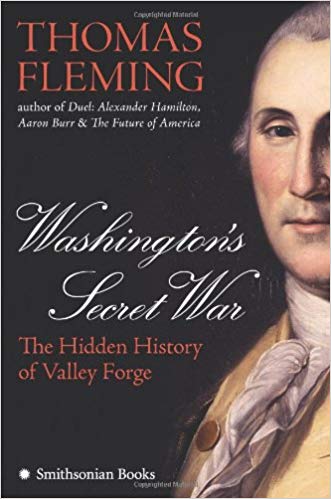