Transition from player to coach comes natural for former standout

Earlier this summer, the Iroquois Nationals lacrosse team traveled to Israel to compete against 45 other nations in the 2018 Federation of International Lacrosse (FIL) World Lacrosse Championship. Oneida Member Brett Bucktooth (Turtle Clan) served as an assistant coach for the team after competing for the Nationals as a player in 2014, 2010 and 2006.

The rigorous ten-day tournament was made even tougher this year when the team’s flight was delayed due to Customs’ issues with Haudenosaunee passports, forcing the team to play its first game on the same day it landed in Israel. Unfortunately, the issue was not new for the Nationals. In 2010, the team was not allowed to travel to England on their homeland passports because the United States would not guarantee re-entry after the tournament.

With a 10-hour flight and a 7-hour time difference, the team’s endurance and increasing fatigue was a concern. The team landed around 10 a.m. and their first game was at 8 p.m. local time, so the players and staff rested as much as they could in those ten hours. But Brett said the team responded well.

“It’s a young man’s game,” Brett said when reflecting on the team’s experience. “I was happy to see the guys compete at such a high level under difficult circumstances.”

The Iroquois jumped out to an early 3-0 lead against the United States, but the Americans responded with twelve goals in the second half – and only conceded two to the Nationals – to secure a 17-9 victory. The team won its next two games, including a matchup with Australia, an improving team and constant foe for the Nationals.

With victories against England, Scotland and Puerto Rico, and losses to a tremendous Canada team in the early rounds of the tournament, the Iroquois Nationals appeared in the bronze medal game in a re-match with Australia. 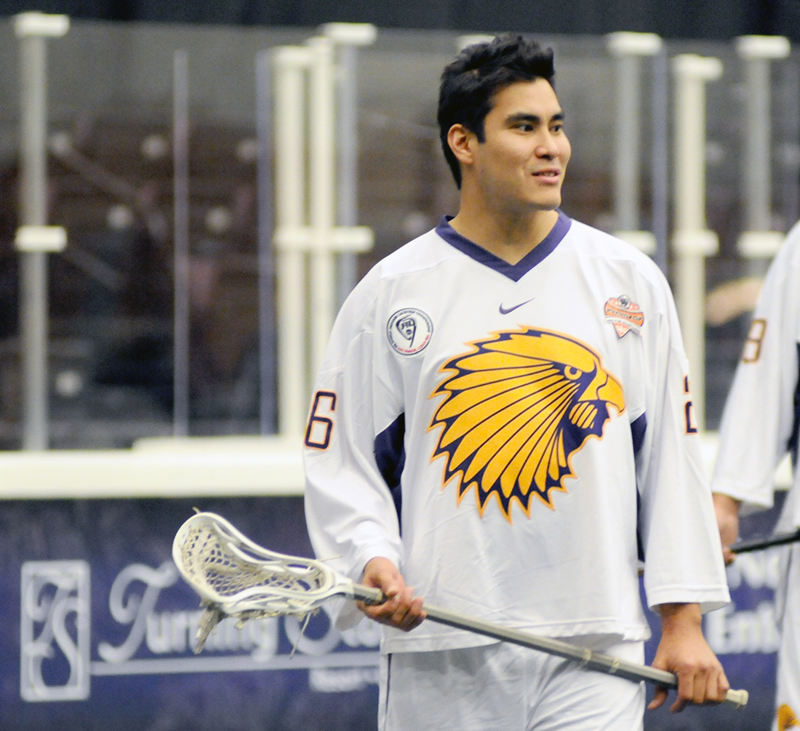 The Nationals pulled out a thrilling 14-12 win to take home the bronze, just as they did in 2014 when they defeated Australia for their first-ever medal at the World Lacrosse Championship. Brett was thrilled to see the team earn another bronze medal with new team leaders emerging.

“Young leaders like Lyle Thompson, Tyson Bomberry, Randy Staats and Austin Staats – they are all-world players,” he said. “They grew a lot [at the tournament] so we’ll look to them to lead us in 2022.”

Jeremy Thompson was the elder captain and team leader on and off the field. The players rallied around him and tried to follow his lead whenever possible, including the lone trip the team took during their time in Israel.

Midway through the tournament, Brett and the team took in some of the sights in Jerusalem after holding a lacrosse clinic for several of the visiting countries. It was a fast-paced tour, but they were happy to see some of the historical spots of the city. The players tried to keep cool as temperatures soared well past 90 degrees before noon and having to play later that night.

“Any time we’re able to represent the Haudenosaunee it’s an honor,” Brett said when the team returned home. The players are proud ambassadors of the sport and enjoy teaching younger players from across the world about the game. Brett and the team were able to work and share stories with players from Peru and Uganda.

As it prepares for the next World Championship in 2022, Brett said the team will hold exhibition games across the country. In the past, the Nationals scrimmaged with SUNY Albany and they hope schedules line up so they can play Syracuse University. Exhibitions give the core players more experience playing with each other, which is critical in every team sport, but especially lacrosse where communication is key.

The transition from player to coach has been smooth for Brett. The process to become an assistant coach for the Nationals team started in the fall of 2017 and he went in with the mindset of being a coach. He missed playing, but he knew the tournament was a tough grind with 8 games in 9 days. The team is also loaded with incredibly talented attackmen and midfielders, his primary positions when he starred at Syracuse from 2003-2006.

Brett, a two-time All American for Syracuse University, takes a lot of his coaching philosophies from his time as a player in the National Lacrosse League. He was drafted third overall in the 2006 entry draft by the Buffalo Bandits and tallied 92 goals and 131 assists in 88 career games during his first eight seasons.

“I always knew I wanted to coach when I was younger, and over the years, you take a little from each coach,” Brett said. “Coach Donahue was the master of the offense. It was fast-paced and exciting. He and coach Desko relate to the players and value those relationships. Student-athletes are able to grow and mature as young men in the program.”

Now, Brett stays busy following his son during lacrosse and hockey seasons. Lacrosse is in his blood and remains a family affair. All of his nephews play and compete on several youth teams. Brett hopes they can continue the tradition of lacrosse excellence as they get older, and maybe one day, coach them on the national team.