As a little girl, Nichola Aregano (Turtle Clan) loved to watch war movies. She confessed to being fascinated by any film involving military action. Entering her junior year at Stockbridge Valley High School this fall, the 16-year-old has decided that merely viewing military maneuvers on the TV screen is not enough – Nichola wants to be a part of the action. And her chosen point of entry into military life is the United States Marine Corps.

“The Marines are the best shot,” said Nichola. “And I believe if you’re going to strive toward something it should be the top.”

Military service is not part of her family’s tradition, but she states emphatically that she has wanted to be in the service for as long as she can remember. Nothing can deter her from her goal, not even the fact that the Marines are noted for having the toughest boot camp in the armed forces, she said.

In some respects, Nichola has been gearing up toward achieving her military aspirations for several years. A self-professed team player, Nichola is used to vigorous physical activities and taking orders. An avid sportswoman, she plays on her school’s varsity volleyball, softball and soccer teams.

The attraction Nichola has for sports is the adrenaline rush playing provides. She said that being up at bat, knowing all eyes are on her next move, affords her sheer excitement. However, she said, the knowledge that she has fellow teammates backing her up is comforting.

“If I crack a homerun hit – great!” said Nichola. “If I strike out, maybe someone else will save the game. I like team sports. I’m not a loner.” 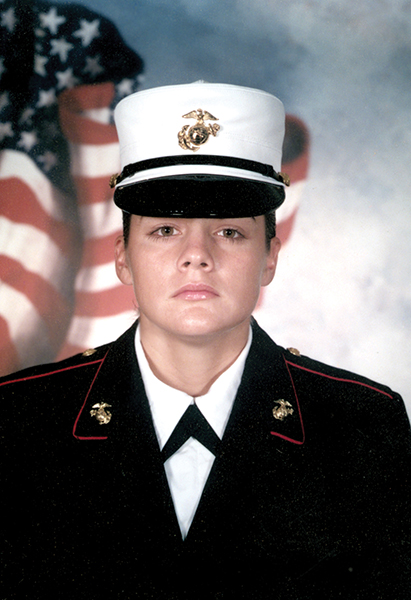 A student must maintain passing grades to remain on a sports team in high school. This requirement has never been a concern for Nichola, who earns straight A’s. Her guidance counselor is urging her to apply to various colleges, but at this juncture, Nichola is not interested in advanced academics, she said.

“The opportunity to go to college will always be available,” said Nichola. “Right now I plan to go with the flow. I’ll see how it goes in the Marines, and after that I’d like to coach school sports.”

Attending college is a necessary part of Nichola’s long-term goals, she said. Coaching school sports is her idea of an ideal job and one that requires a bachelor’s degree. She said her sights are set on eventually studying at SUNY Cortland and majoring in physical education.

Playing sports helped build Nichola’s self-esteem. She said that coaching kids and helping bolster their sense of self-worth is the reason she’s attracted to the vocation.

Nurturing others is nothing new to Nichola. As the oldest girl in her family, she has had the responsibility of attending to her younger sisters for the last few years. She laughs when she tells how they try to emulate her.

“One of my sisters heard me telling my mother about my plans to join the Marines, and now she wants to join, too,” said Nichola, rolling her eyes.

Initially, Nichola was reluctant to share her plans to join the service with her mother. She said she was worried her mother would react badly, fearing for Nichola’s safety. To Nichola’s surprise and delight, her mother was extremely supportive and is encouraging her to follow her dream.

“I respect my mom; we’re very close,” said Nichola. “I’ve learned a lot of lessons watching my mother struggle. She’s trying to help me avoid mistakes she’s made, and for my part, I’m trying to listen and learn. I’m confident I’ll succeed, regardless of the path I choose.”

Nichola Aregano-Diaz (Turtle Clan), a corporal in the U.S. Marine Corps, was due to finish her four-year stint in the military next October. Instead, the 21-year-old newlywed extended her enlistment seven months, volunteering to return for a third tour in Iraq.

“It’s scary over there, but they need bodies. There’s not enough soldiers,” said Nichola, who’ll leave for Iraq in August. “My husband doesn’t want me to go, but he’s accepted it.”

A satellite operator, Nichola served four and one-half months on her first tour during the onset of the war in 2003. She said one of the problems they encountered was hordes of lies that bite and for which they didn’t have the necessary repellents. On her second tour that ended in September, the troops has bug spray and netting, which helped the situation.

The extremes in temperature in Iraq were also noted by Nichola. She said in February it was so cold she would sleep with all her gear on inside a sleeping bag. By April, the heat begins to rise, Nichola said, and by 10 a.m., the temperature would be 110 degrees and 120 by noon. The hottest temperatures she saw were 125 and 129 degrees.

Although the military tried to improve the sleeping conditions for the soldiers by installing air conditioners in their tents, the power was not reliable. But, when asked what she missed the most while being in Iraq it had nothing to do with the weather.

“I missed the freedom to put real clothes on. I wanted to wear shorts so bad,” said Nichola, who is currently stationed at Cherry Point, NC. “We were constantly in our brown camouflage.”

Nichola said that she had a lot of down time while in Iraq and that the books her family sent her helped alleviate the tedium. The soldiers also have a PX where they buy a variety of items, including TVs. And, the TVs in turn allow the soldiers to shop the internet.

When Nichola does finish up with the Marine Corps, she is contemplating returning to school to become a dietician. And despite adversities she’s encountered serving in Iraq, Nichola continues to highly recommend enlistment to anyone who asks.

“I think enlisting is an excellent opportunity – it gives you a chance to see the world,” said Nichola. “And, as for Iraq, I hope we finish what we started and accomplish our goals. We’ve taken too many casualties.”