Military Service is a Family Tradition for Kuhls

Military Service is a Family Tradition for Kuhls

Since Heather Kuhl (Wolf Clan) was 6 years old, she has dreamt of joining the United States Air Force. On Jan. 5, 2000, she’ll begin to live her dream when she flies to Lackland Air Force Base in Texas for basic training.

The daughter of an Air Force brat, and an Air Force brat herself, Heather views enlisting in the service as part of a family tradition. Plus, she added with a laugh, she has an ulterior motive for her decision to join.

“I want to achieve a higher rank than my dad did in the Air Force so he will have to salute me,” said 19-year-old Heather with a mischievous grin that does not mask her true determination to succeed in the military.

And she is resolute despite difficulties she has already encountered. Heather had planned to become an air traffic controller. During her first meeting with an Air Force recruiter, she was informed the competition for the position would be intense. The recruiter then went on to suggest that Heather could always become a secretary if she didn’t make the grade. 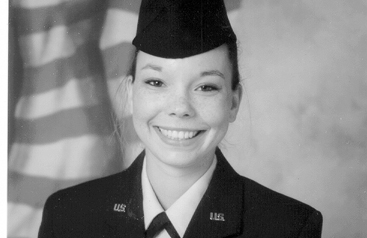 “He never would have told a guy he could be secretary,” said Heather. “That’s okay though, because I’m prepared to be asked why I’m trying to hold a job which has been dominated by men.”

Heather passed the physical and the 12-hour entrance test into the Air Force. A grade of 62 was necessary to be considered for air traffic controller’s position. Heather earned a 63. She said her happiness was short-lived; she was disqualified because she needs corrective lenses.

Upon initially hearing the news, Heather admits she was crestfallen. However, she was offered an alternative she found appealing – a command and control position. The excitement of working in an air control tower will still be present. And, Heather adds quickly, both jobs vary from day-to-day, off-setting any boredom.

“I’ll watch the radar screens and the sky, telling pilots when to land and take off,” said Heather. “It’s a lot of responsibility.”

After she completes boot camp, she’ll be off to technical training in Biloxi, Mississippi. Upon completion of that six-week program, Heather will draw up a dream list of bases where she would like to be stationed. Virginia, North Carolina and South Carolina head her list because they are not too far from home.

And home will remain where Heather’s heart lies. Her mom, Kathy, and her brothers and sisters are tight-knit, and she confesses, she’s anticipating pangs of separation already.

She experienced a brief period of homesickness last year when she moved to Utica while attending Mohawk Valley Community College. Not only was she lonely for her family, she said she wasn’t ready for the freedom of living on her own.

“There was nobody there to tell me to get up or to study,” said Heather. “Five of us shared an apartment and within a few months we all moved back home.”

A little older and a lot wiser, Heather feels the military is the right choice despite necessitating another departure from home. It’s the discipline she is seeking within the ranks of the Air Force that she finds most appealing. Yet, Heather said, her yearning to join the service has deeper roots.

“I remember being little and watching my dad and the respect he received because he was in the Air Force,” said Heather. “I learned that if you enlist and do a good job you have something to be proud of. And that’s all I really want – to be able to do a good job and to take pride in my accomplishments.”

Another Kuhl Joins the Military

It seems some things just run in families. Brown eyes, dimples, curly hair. Other, less obvious traits can be passed down, too, including ambitions. While not genetically mandated, family ambitions can run deep – just ask William Kuhl (Wolf Clan). At 16, he’s already planning to follow the example of his grandfather, his father and his sister and join the United States Air Force upon his graduation from Stockbridge Valley High School in two years. 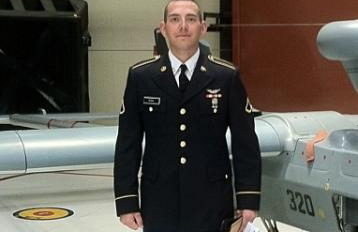 “I was an Air Force brat,” admits Will. “I was born when my dad was stationed in Louisiana, and then when I was five, he was transferred to Holland. We were there until I was ten. I don’t remember a lot, but I do remember the plane trip.”

If Will gets his wish, he’ll eventually be working on planes, not just riding on them. After he enlists – and endures the rigors of boot camp – he wants to train to be a mechanic. His dad worked on planes and trucks in the Air Force and Will would like to follow in his path. He’s already been introduced on a small scale, changing shocks on cars and performing similar automotive maintenance jobs. But this training will come in handy long before his enlistment.

Will is planning to take his driver’s permit test soon and hopes to have a car by the summer. To help earn money to keep the car running, Will has applied for a job at the Nation’s SavOn convenience stores.

The realities of holding a job will be nothing new to Will, who has had a good introduction into the work world after participating for the past three years in the Nation’s Youth Work/Learn program. His initial job with the program was digging at an archaeological site. One of the arrowheads Will unearthed from the dig, held on Nation land, is on display at the Shako:wi Cultural Center, he said.

For the last two years, Will worked at the Villages at Turning Stone’s RV Park, where he pruned trees, weeded the lawn and mopped the floors at the park’s buildings.

“Working at the RV park was good experience,” said Will. “The program really helps prepare you for the job – you have to go every day, wake up early, be responsible. It showed me what a good work ethic is. I feel prepared for a real job.”

A version of this story first appeared in The Oneida, Issue 2, Vol. 4 in February 2001

*Private first class Will Kuhl graduated on Feb. 1, 2012 after 34 weeks of tech school to train as an Unmanned Aerial Vehicle operator.