On Saturday, May 14, Nation Members traveled to New York City for a program showcasing Oneida and Haudenosaunee culture to teachers and their families for the New-York Historical Society’s Teacher Appreciation Day. It was the first time the two organizations collaborated to offer educators a more in-depth look at the heritage and shared history of the Oneida People.

A special social dancing presentation featuring Oneida Members Heath Hill (Wolf Clan), Jamisin Cathers (Turtle Clan) and Brooke Thomas (Wolf Clan), as well as other Haudenosaunee dancers, was met with enthusiasm from all attendees, including the staff at the museum. The 45-minute exhibition, which also included more in-depth explanations of the significance of Haudenosaunee regalia and the meaning of different dances, was the culmination of a day filled with unique learning opportunities covering the Onyota’a:ka language, Haudenosaunee legends and our legacy as the United States’ First Allies. 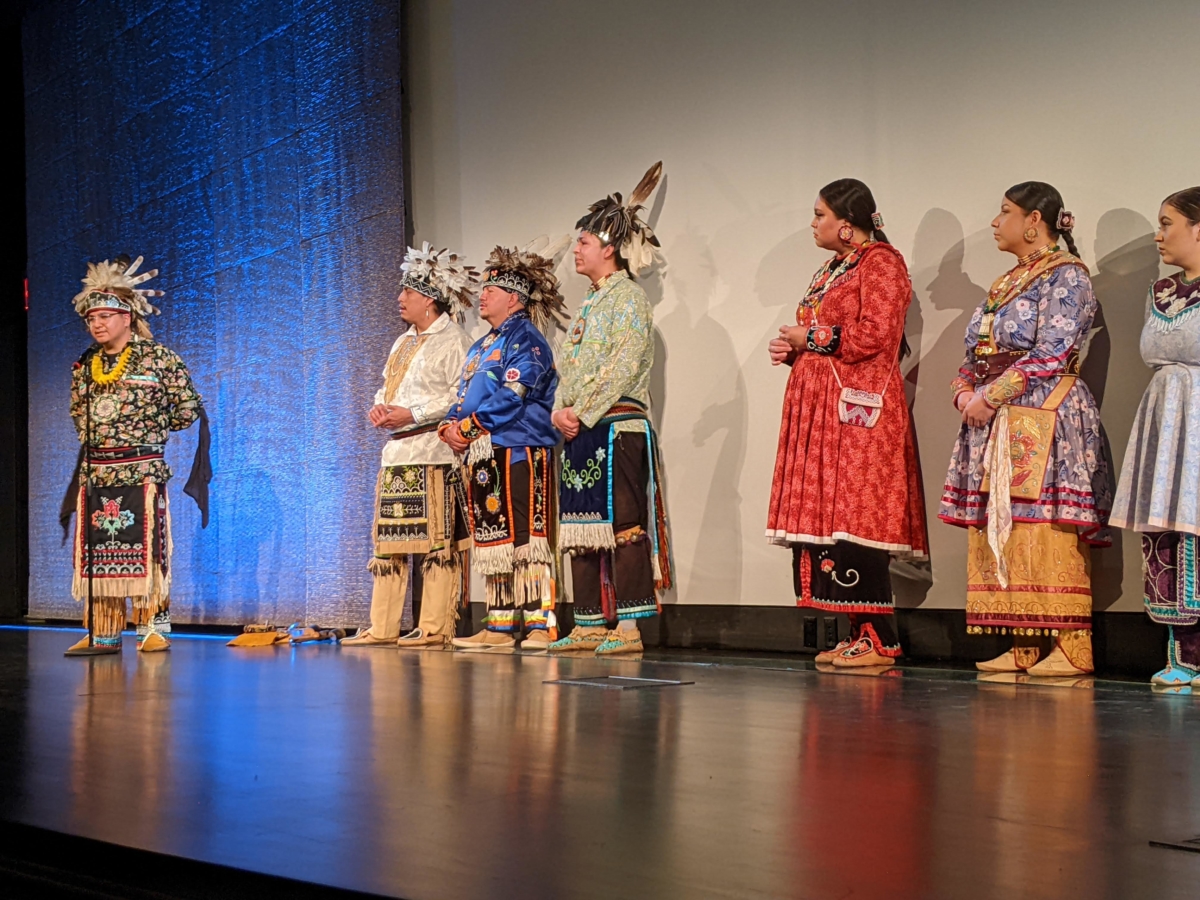 The core of the program was a screening of the Nation’s documentary, “People of the Standing Stone: the Oneida Indian Nation, the War for Independence and the Making of America.” The film documents the Oneidas’ role in aiding the fledgling United States in its battle for independence, including at the historic Battle of Oriskany – one of the bloodiest of the war – which pitted brothers and sisters of the Haudenosaunee Confederacy against one another to protect Fort Stanwix from a British siege.

After the screening, audience members had an opportunity to ask questions in a Q&A with the Nation’s Member Outreach and Advocacy Coordinator, Derek Montroy (Turtle Clan). The engaged audience of teachers were eager to learn more about this critical story that is often forgotten in American History education.

“Events like this provide a tremendous opportunity for educators, and their children, to learn more about our people,” Derek said. “Raising awareness of our legacy as America’s first allies with local and regional partners helps us tell the more complete story of America’s founding.”

Earlier in the morning, Brooke and Derek participated in a story time presentation for children to introduce two Haudenosaunee legends that were adapted into Oneida language-learning books: “The Tale of Two Teams” and “The Legend of How the Bear Lost His Tail.” Brooke read them aloud, which included three Oneida words (ohkwa:lí̲ “bear”| skʌhnáksʌ̲́ʼ “fox”| kutilyoʼshúha̲ “animals”) that the kids learned to say at the end. With the illustrations, phonetics, spelling and repetition of the words throughout the story, the language can be learned by anyone that picks up the books.

The Oneida Indian Nation participates in community events throughout the region to bring greater awareness to the Oneidas’ role in the formation of the United States. Organizations and educators are helping amplify untold or under-told stories that are too often missing from history textbooks.

Our story is memorialized so future generations won’t forget our contributions to this country. You can take a look at two significant contributions the Nation made to the Museum of the American Revolution in Philadelphia and the Smithsonian’s Museum of the American Indian in Washington, D.C. at https://www.oneidaindiannation.com/our-story-memorialized/